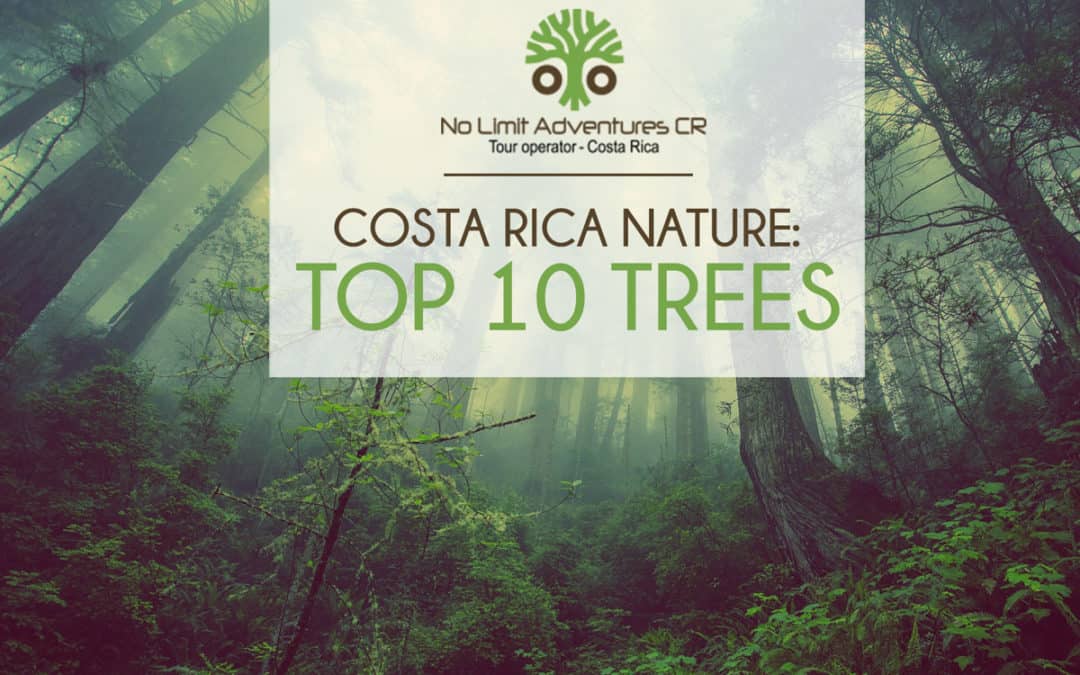 Costa Rica nature is a treasure for the world. In a territory smaller than Lake Michigan, this country is home to about 5% of the world’s biodiversity.

One of the most important elements of this biodiversity is trees. Its function goes beyond its beauty, and is not only limited to the shade it provides in our hot tropical climate. The trees are the lungs of the planet, purifying the air. In addition, they are sources of energy, recent research has proven its ability to expel positive vibrations that are key to our health.

Trees are also part of our history, some of them even relics counting thousands of years of age.

The diversity of arboreal species in the world is approximately 60,000. In Costa Rica we have an impressive number of 2,300 species. Today we bring you a small brushstroke that lists the top 10 most representative trees in Costa Rica nature. Book your private and personalized tour with us and get to know these and many other species!

This type of tree is found only in the Central Valley of Costa Rica and its access is very restricted. The various canyons of the rivers or steep ravines are their homes. Their beauty does not allow them to go unnoticed being great representatives of the nature of Costa Rica.

Its gray color and scaly bark characterize this species. In its younger trees, its foliage is soft green and with reddish tones. Its flowers, pollinated by birds, measure 8 centimeters long enchanting with its strong perfume and large white petals with a reddish base. At the end of the twigs, the new leaves form very bright red and green rosettes, inside which small metallic beetles are hidden. This tree is known for the hardness of its wood.

Native of low and hot lands of all the Pacific Coast of Costa Rica, the Soncoya features oblique branches, with very long leaves and a well-extended canopy. The tree gives very large and heavy fruits, which is sweet and delicious, a delicacy for wild animals. Some Costa Rica nature scientists assure that the Soncoya is the wild species that our Mesoamerican indigenous learned to cultivate giving rise to the well-known guanabana (Annona muricata) however, the fruits are different, being the Annona purpurea preferred by many.

Its name is inspired by its thick crust which is much larger than normal in relation to its trunk. It is not a large tree, but its trunk and its branches are corpulent, its canopy is very similar to the Guanacaste tree. With a very hard wood, it is recognizable by the double and twin spines that adorn its trunk. During the months of April and May, Costa Rica nature exhibits the flowers of this tree. Its flowers are of a beautiful light lilac color. El Sietecueros is native to the North Central Pacific of Costa Rica.

The Sapranthus is a simple tree that usually goes unnoticed. However, its magic lies in demonstrating how wise nature is by developing ways of subsisting. This fascinating tree of Costa Rica nature evolved millions of years ago, causing its flowers to expel a strong smell of meat. This in order to attract their natural pollinators, flies. Another very interesting fact about this species is its kinship with the tree of Ilan-Ilan famous for the delicious smell of its flowers used in expensive perfumes. In addition, it is also a family of the Soursop tree and the Annona, whose fruits are delicious, while the fruits of El Palanco are not edible having the appearance of guineas.

It is Costa Rica nature species of fast-growing, filling the landscape with color with its yellow leaves. The delicious fragrance of its flowers attracts butterflies, bees and hummingbirds. Being a softwood tree, it is easy to give ornamental shapes by means of constant pruning. Pose an irregular and rough bark. Ideal for growing epiphytic plants such as orchids, aerial cacti, ferns, etc. Its wood is attractive, fine and very aromatic, used to produce beautiful handcrafts.

Its wood is hard and purple like the mantle of Jesus of Nazareth. Due to its high cost of sale in the market there has been a shortage of this tree species, which has even been classified as endangered. This situation led our country to declare it as a protected species, prohibiting its commercialization and cutting. Therefore, they are currently in greater numbers in national parks and protected areas located in the central and southern zone of the Pacific coast of Costa Rica. They are recognizable among other species of trees because of its perfectly cylindrical and gray trunk covered with lenticels or black warts.

It lives in gardens and small patios adorning the houses of rural areas of the country. This tree gives fruits that when maturing is black. Its flavor is extremely sweet and is used for juices, jellies, wines, vinegars and desserts. It is a very nutritious fruit with vitamin A, iron, phosphorus and calcium. Its structure is small and with a thin stem. Its canopy is broad, formed by a hundred leaves of brilliant intense green color. Its foliage contrasts artistically with its small white flowers, which attract bees and other insects. Its leaves release a resin that is used to frighten flies naturally.

Known in Costa Rica as Mapuche

This tree was believed extinct a few years ago. However, thanks to the country’s policies to protect Costa Rica nature, it can be found now in parks and gardens, especially in the Central Valley. This species has a high ornamental and landscape value due to its straight and stylized trunk. Its foliage is very dark green and large panduriform leaves (shaped like a guitar or violin). Its flowers delight the environment with a scented aroma. There is no better arboreal species than the Mapuche to plant and decorate small spaces in urban and residential areas.

At some point, a tree typical of the landscape of nature in Costa Rica, nowadays is very difficult to find. It inhabits farms and forests and are considered a treasure. It is characterized by its tall shape and narrow canopy of green leaves that hide its bouquets of yellow flowers visited by bees, insects and birds. It provides a very small fruit with an abundant bunch. The fruits are used for crafts. Its wood is of excellent quality and is used for various uses including medicinal ones.

Last but not least, this species is the National Tree of Costa Rica. It is notable for its majestic extended canopy, whose diameter can be up to 2 times the total height of the tree. The Mesoamerican natives baptized this tree as cua-necaxtli (meaning big-eared tree) because of its fruit that resembles a large human ear. It is a fast-growing species, timber and that gives fruits and seeds from 8 years of age. The most surprising thing is that it can form almost pure forests on abandoned land. It belongs to the select group of forest species ATRAPA-CARBONO.

Come with us and discover these and more species of impressive trees of Costa Rica nature. Book your private and personalized tour.