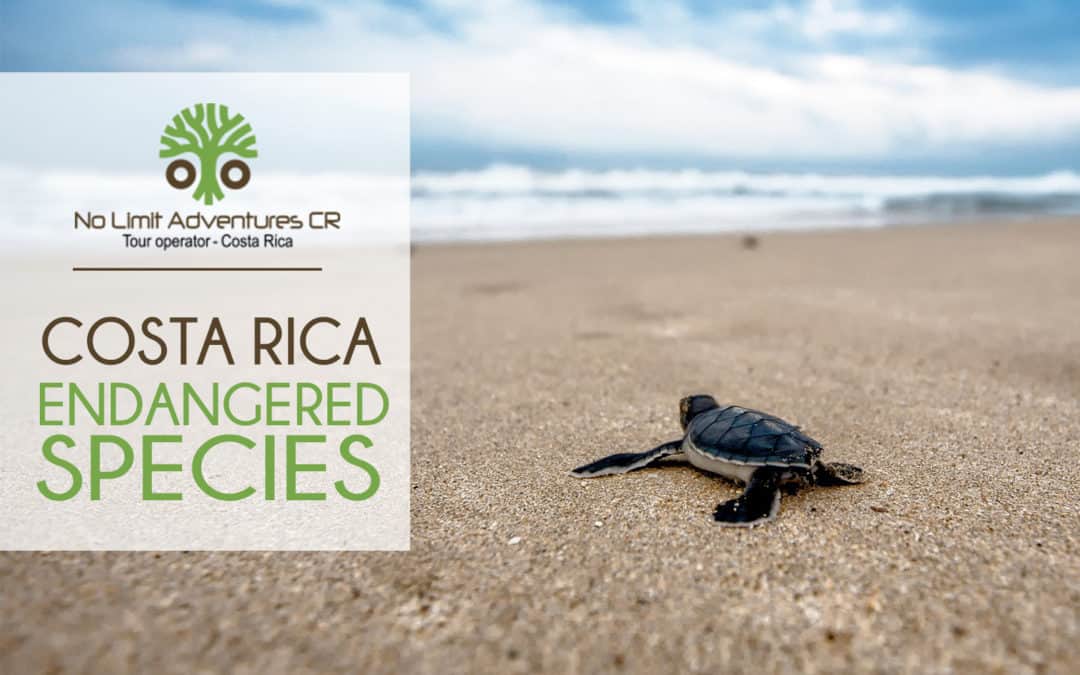 Costa Rica is one of the 20 most biodiverse countries in the world. It is home to more than 500,000 species which represents almost 6% of the total estimated species worldwide. Despite the great natural wealth that is counted, our habitats are also suffering from a great threat, and as in the rest of the world, the number of Costa Rica endangered species increases year after year.

Due to various factors in the world, flora and fauna is suffering lethal effects, leading natural life cycles to extinction. More than 26,500 species are facing extinction which represents 27% of all assessed species in the world.  Sadly, our country is not an exception, according to IUCN Red List, the number of Costa Rica endangered species rises to more than 3,800.

Among the variety of causes for this terrible phenomenon, we can mention the widespread destruction of habitats by the growth of infrastructure created by man. Also, another factor that has contributed most to animal extinction is the illegal hunting of animals and overexploitation of various species. An additional problem is generated by the entry of new exotic species into a habitat, creating alterations so rapid that native species cannot adapt. Climate change in such a short time due to pollution is maybe the most important cause since it has not allowed an adaptation of the species.

The mammals’ group have the largest number of Costa Rica endangered species with 5.5%.  The most critic species is the giant anteater but even other animals that we think are safe have a certain level of threatened like the howler monkey.

Other mammals in danger of extinction are:

Among the amphibians, we can remember the Golden Frog which disappeared in 2004 and it was indigenous of the Monteverde Cloud Forest.  The harlequin frog is an amphibian belonging to the Bufonidae family, also cataloged as one of the Costa Rica endangered species. Its habitat is wooded and humid areas of low altitude near rivers however, the global warming has affected the development and survival of this species.

The birds do not escape from this situation either. The mangrove hummingbird is part of the Costa Rica endangered species. This native species inhabits wetlands and mangroves in tropical and subtropical zones.  Due to the indiscriminate destruction of mangroves, it has generated a disorder in its habitat and thus leaving it within the threats of extinction in Costa Rica.

Within the same group of threatened fauna, the green lemon macaw stands out for its unique beauty. These amazing birds characterize for its long life, reaching up to 60 years. The IUCN red list, listed the green macaws as one of the birds at critical risk of extinction in Costa Rica due to the destruction of its habitat, hunting for domestic use and illegal wildlife traffic.

The manatee, also known sea cow is a large mammal that can weigh up to 600 kilograms and measure between 3.5 and 5 meters in length.  This important animal, which was recently declared a National Symbol to help with its conservation, was included in the IUCN red list in 2008.

The main threats to the aquatic Costa Rica endangered species are the water contamination mainly by plastic; also poaching and the commercialization of their eggs.

If you are planning to visit Costa Rica, visit one of the many National Parks, with your entrance fee you will support the country´s conservation efforts.  Contact us and we will take you to experience Costa Rica